Graded TBF.  3/4 sister to Mare of the Year PRAISE ME

After losing my homebred Premium Trakehner mare Volatis Casiphia in 2020, I was honoured to be offered the beautifully bred graded Trakehner mare Godington Primavera (Poppy) on breeding loan from my good friend Vinca Boorman.  Poppy embodies so many of the best qualities of the Trakehner breed – elegant, gentle, athletic and of course incredibly beautiful.

Although she had a field injury as a youngster, Poppy did compete, qualifying for the Area Festivals at Novice and Winter & Summer Regionals at Prelim.  She is fully graded by the Trakehner Breeders Fraternity. 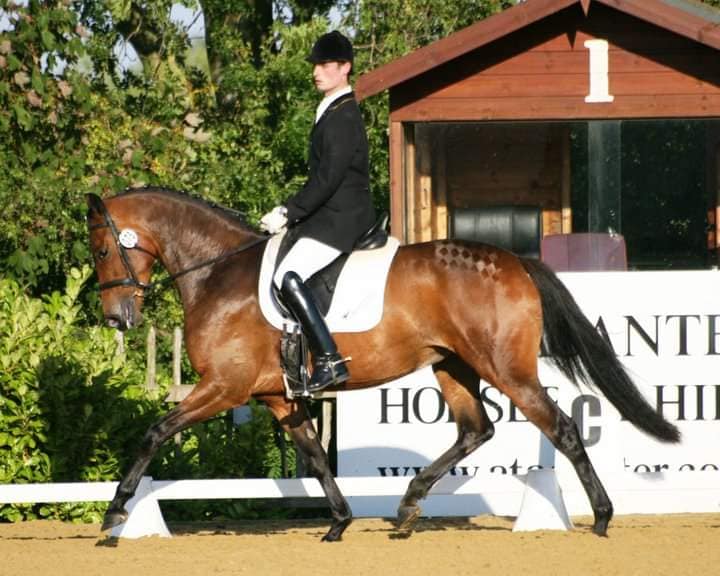 Poppy hails from the small but very important Trakehner mare family of Pigulka. Her dam St.Pr & Pr.St Prettiness was imported from Germany where she had been awarded the Rheinland mare grading champion title and produced the licensed son Godington Parsifal and Godington Pambula, currently eventing at BE Novice and Reserve Grading Champion. Prettiness is by the Grand Prix stallion Van Deyk, sire of 2 Bundeschampion and Grand Prix brothers in Kaiserdom and Kaiserkult.

Prettiness is also the half sister to the 2010 Trakehner mare champion, auction highlight and Elite Mare Praise Me, who is by Goldschmit. This makes Poppy her 3/4 sister. Praise Me competed to PSG before starting her breeding career and her eldest daughter St.Pr & Pr.St Pure Freude has also been awarded Elite status, having won at Advanced Medium, qualified for the Bundeschampionate and was Regional Foal Champion.

Prettiness’s dam is the half sister to the licensed Pretty Dancer who from very few coverings produced the CIC*** Partytaenzer and the Elite mare Sirikit, dam of Sir Picasso (2017 Reserve Champion Trakehner Licensing, Reserve Champion 4yo riding horses at the Bundesturnier and State Stud stallion). Another half sister is the PSG competitor Loveliness.